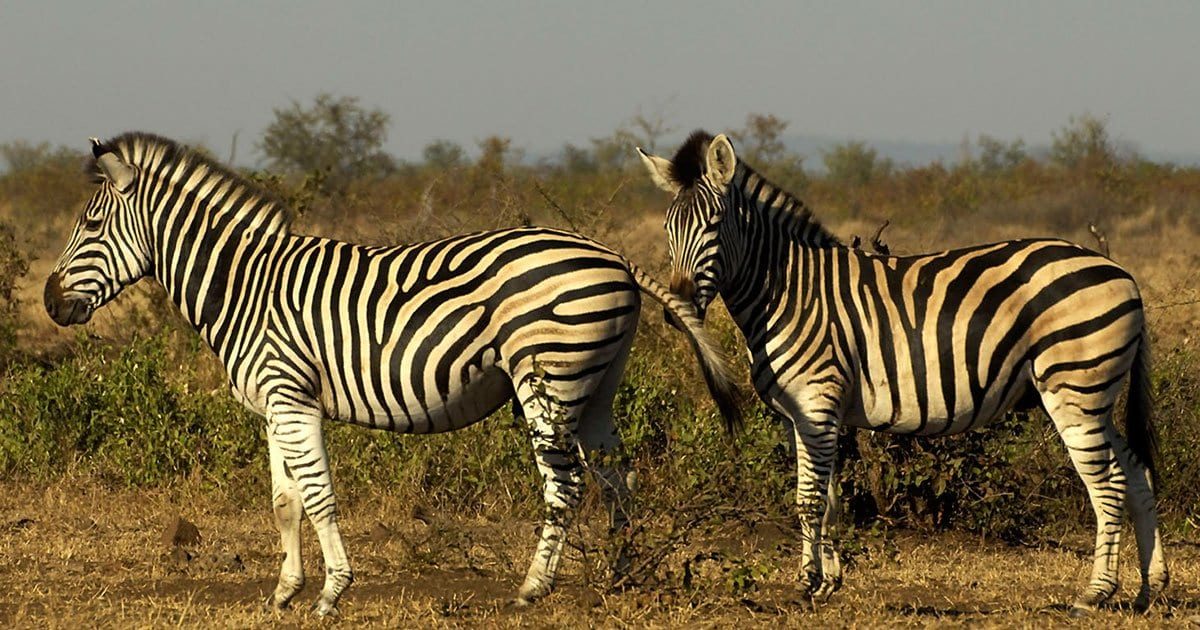 Belonging to the horse family, the plains zebra has typical horse-like features. The general colour is white or buff with starkly contrasting dark brown to black stripes, which become broad and oblique over the hind quarters. Stripes extend very low down to the belly on the flanks. The height at the shoulder is about 50 – 55 inches (127 – 140 centimeters) and the animal weighs in at about 500 – 700 pounds (230 – 320 kilograms).

Plains zebra differ from mountain zebra in that ears are shorter, a dewlap is absent, there is no “grid” pattern at the base of the tail and they have lighter shadow stripes between the black stripes on the hind quarters.

Diet:
Zebra prefer short, green grass, but will eat tall, course growth. They are unselective bulk grazers and are less sensitive to food quality than other large herbivores and can maintain good body condition even on very poor veldt. Zebra require approximately 14 litres of water per day to meet their physiological requirements but will drink an average of 21 litres at a time.

Behaviour & Habits:
Zebra are gregarious animals that form small family groups consisting of a stallion, one or two adult mares and foals of varying ages. Stallions that have no mares form bachelor groups or live alone. Stallions fight viciously for control over females and can bite and kick quite ferociously.

Zebra are often seen in the company of other animals like blue wildebeest, impala, waterbuck and giraffe.
There is quite a lot of group interaction and social grooming. Vocal communication is important to zebra. Courting stallions “snicker”, and animals whinny or snort by forcing air through the nostrils to warn of danger.


Tactics:
Zebra are found in well-grassed woodland or fairly open grassland. It is relatively easy to stalk up to a zebra in woodland, but can be quite difficult in open habitat. It is advantageous to the bowhunter that zebra are not easily spooked. They are inquisitive and sometimes stand to watch an approaching intruder. They might even approach closer to investigate. Although zebra will allow you to approach them in open habitat, their flight distances are too far to fall within bow range. It is therefore advisable to try, as far as possible, to approach without being seen or to position yourself to intercept a herd along its direction of travel.

Zebra have a keen sense of smell, sight and hearing. Always approach from downwind if possible. Zebra are successfully hunted using walk-and-stalk and spot-and-stalk methods, or from blinds, elevated platforms and tree stands. Zebra are quite dependent on water and this makes waterholes an ideal ambush site. Zebra often drink water just before sunrise or just after sunset.

Shot placement:
Quartering-away and broadside shots into the heart/lung area should be the target of choice. Zebra are fairly broad animals and arrow pass-through is not always guaranteed.

Follow-up:
Wait at least 30 minutes before following up on a good heart/lung shot, 2 – 3 hours after a liver shot and 10 – 12 hours before you begin looking for a gut-shot animal.

Zebra have a fairly slow blood clotting time of about 9 – 11 minutes. They therefore lose a lot of blood before the clotting process becomes effective, which works to the hunter’s advantage.