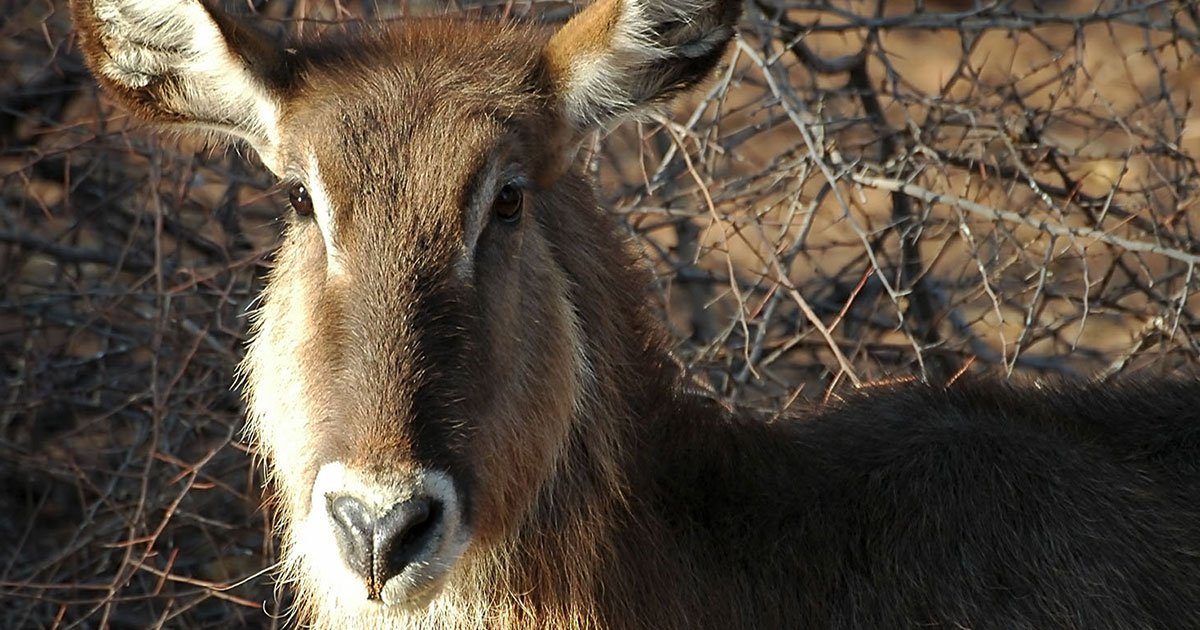 ABOUT THE WATERBUCK:
Description:
The waterbuck is one of the larger ungulates and are stockily built with short legs. They are greyish brown with a white collar high on the neck, white eyebrow stripes and a distinctive white ring on the rump from whence the colloquial Afrikaans name “Kringgat” (circled backside) is derived. The coat is very often rough and shaggy and there is a shaggy ruff on the underside of the neck. They have a strong, turpentine/goat-like odour and are often smelled before they are sighted.

Diet:
Waterbuck are predominantly grazers with a preference for long grass. They sometimes browse on shrubs, trees and herbaceous plants when grass is low in protein. They also eat fallen fruits from the marula tree and sometimes baboon droppings.

Behaviour & Habits:
Waterbuck are most active in the early mornings and late afternoons but also feed and drink at night. They form herds of 6 – 12 but herds of up to 30 are not uncommon. Herds tend to be bigger in the summer. Females and young form nursery herds. Mature bulls are territorial and males without territories form bachelor groups.

Serious fights are fierce and more often fatal than in other antelope. Some territorial bulls will tolerate the presence of a subordinate bull. Bachelor herds are forced to stay in sub-optimal habitat outside the dominant bull’s territory. They are allowed to move through the territories as long as they behave submissively. Nursery herds have home ranges overlapping with male territories.

Cows leave the herd to give birth. Calves are hidden for the first 3 – 4 weeks after which they join herd. Young males are expelled to bachelor herds at the age of 9 – 12 months when horns start to grow. Females remain in the herd they were born in.

HUNTING THE WATERBUCK:
Tactics:
Waterbuck are big, heavy animals with quite a thick, loose skin and good arrow penetration is absolutely essential. The loose skin can sometimes cause problems with the blood trail, even on complete pass-through of the arrow. Because the skin is fairly loose it occasionally moves over the entry or exit wounds and reduces the amount of blood left behind to follow.

The obvious and most successful bowhunting technique for hunting waterbuck is to sit in a blind or treestand at a waterhole or on a well used approach to a waterhole. Waterbuck usually stay close to water and any hunting efforts far from water will be pointless.

Waterbuck are not as vigilant as other more nervous species and could be taken using walk-and-stalk and spot-and-stalk methods. They also do not run far if spooked and settle down fairly quickly to allow a second stalk if the first was unsuccessful.

Shot placement:
Waterbuck are big animals. One should not attempt shots other than broadside or quartering-away shots.

Follow-up:
Wait at least 30 minutes before following up on a good heart/lung shot, 2 – 3 hours after a liver shot and 6 – 8 hours before you begin looking for a gut-shot animal.

See All Posts By This Author
PrevPreviousRed Hartebeest
NextBushbuckNext