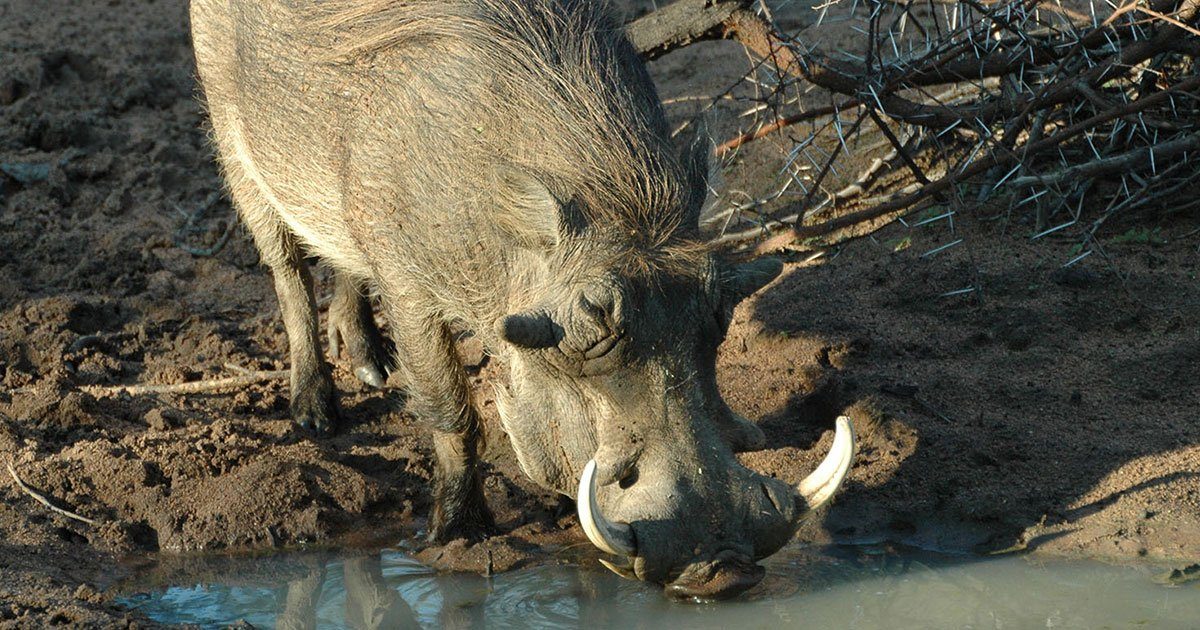 ABOUT THE WARTHOG:
Description:
Coarse bristles sparsely cover the body, which is predominantly grey in colour. The grey sometimes resembles the colour of the soils in which they wallow or dust bathes and can cause the animal to appear in a range of hues, from almost black to orangey-brown. A distinct crest of dark hairs appears from between the ears to the base of the tail. Warthog have prominent cheek whisker, especially noticeable in young piglets. The warthog’s legs are relatively thin and short for its body size.

The body is elongated and the large head is somewhat flattened, ending in and expanding muzzle with a typical pig-like snout. The cartilaginous snout is effectively used as a shovel for digging. Beneath each eye on each side of the head is a prominent wart, whence the warthog’s name is derived. Males have an additional pair of warts further down the snout to protect the eyes in fights. These warts are not true warts but rather skin growths.

The prominent “tusks” are actually modified canine teeth, which grow out sideways from the jaws. The tusks on the lower jaw are smaller than the upper pair and wear up against the upper pair, resulting in sharp and formidable weapons for defense.

Visible male / female differences:
Males are larger than females and have broader heads and larger tusks and have two pair of warts on the side of the face, where females only have one pair. The male’s scrotum is prominent and the females have two pair of mammae between the hind legs.

Diet:
The bulk of their diet is grass, but everything from seeds to roots and underground stems is eaten. They also eat bark, fruit, invertebrates, sometimes carrion and is known to kill rats, frogs and snakes. The piglets will eat the mother’s dung to inoculate their guts with bacteria. They obtain minerals by gnawing on bones, soil and stones.

Behaviour & Habits:
Warthogs are active during the day with a little activity at night. They shelter in large holes, usually abandoned aardvark burrows. Holes are modified by digging with the forefeet. Warthogs enter their holes backwards so that any pursuer has to face their formidable tusks. Warthogs may use the same hole for a few nights running but there is no long-term use of particular holes. Holes can be shared with other species. The upper hard edge of the muscular snout is used for rooting. The warthog often goes down onto its knees when grazing or rooting. Warthogs are one of the first species to lose body condition during droughts.

Wallowing in mud is used to cool down and remove tampans which are large grey, tick-like parasites. They also rub on rocks, trees and similar surfaces. Mature boars dominate young males and sows. The contact call is a soft grunt from an adult, a whistling squeal from a piglet. Males fight by wrestling head to head, which escalates to striking sideways and upwards with the tusks. The warts under the eyes are protection against these blows. Only lions and groups of spotted hyenas regularly prey successfully on mature warthogs. Baby warthogs are very sensitive to cold and wet, and they sleep on a raised shelf at the back of the burrow or on top of the mother, which keeps them out of any water that runs into the hole.

HUNTING THE WARTHOG:
Tactics:
Warthogs present a real hunting challenge. They tend to frequent open habitat, which makes walk-and-stalk techniques difficult. They are equipped with good senses and are mostly very alert to what is going on around them. Their good sense of smell makes it advisable to approach them from downwind. Approaching them when they are in groups is no easy task.

The best way to hunt warthog is to sit over a waterhole using a blind or treestand. Warthogs drink regularly and make use of muddy wallows in sodic areas and around waterholes. They become less vigilant when wallowing and are usually very blissfully engrossed in their mud bath.

Another method is to locate a burrow during the early evening in which a warthog has retired for the night. Set up an ambush at a convenient spot close to the burrow and patiently wait in position from just before first light. The same technique can be used on cold, rainy days. Warthogs remain in their burrows while the weather is unpleasant and emerge when it improves.

Shot placement:
Warthogs are well muscled and have relatively heavy bone structures for their size. The large, broad head, short legs and bone structure make frontal shots inadvisable. The only two shots that should be considered is the broadside shot or the quartering away shot. Warthogs have good reflexes and are known to jump the string. Either wait for the warthog to become totally relaxed or compensate slightly by aiming a little lower and a little more forward than usual.

Follow-up:
Wait at least 30 minutes before following up on a good heart/lung shot, 2 – 3 hours after a liver shot and 6 – 8 hours before you begin looking for a gut-shot animal. Be careful when approaching a wounded warthog as they can inflict serious damage with their tusks.