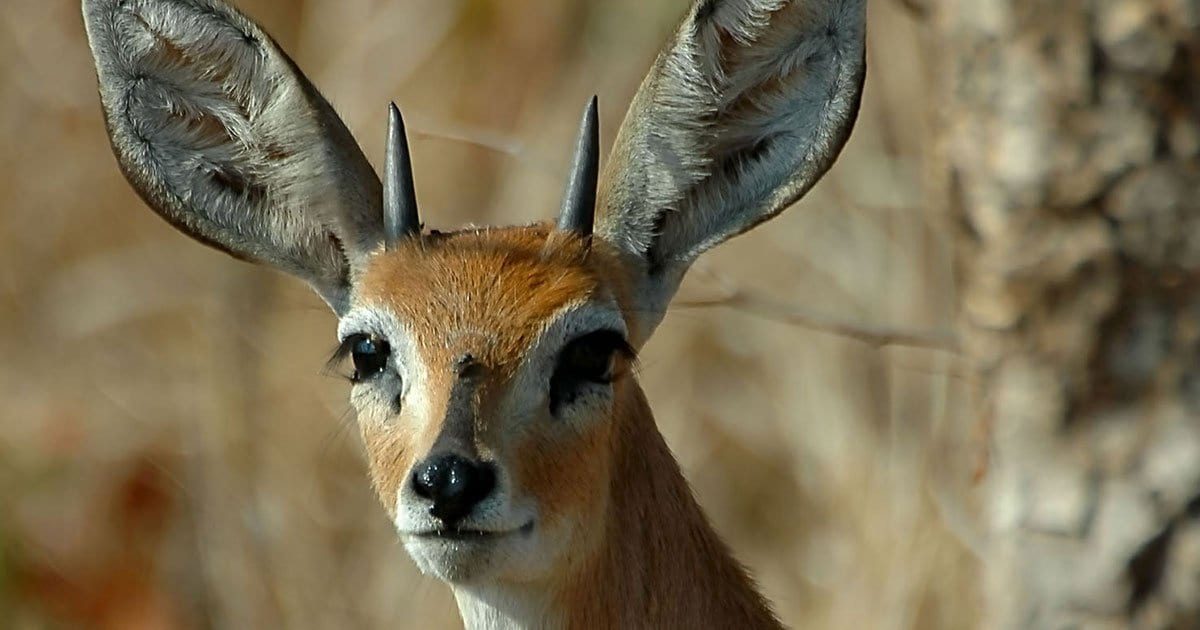 ABOUT THE STEENBOK:
Description:
These are small, gracious animals with relatively long legs and a slender body. Adult ewes have an average shoulder height of 20 inches (51 centimeters) and an average weight of 24 pounds (11 kilograms) compared to 19 inches (49 centimeters) and 24 pounds (11 kilograms) for males. The name “steenbok” is derived from the Afrikaans word “steen” (brick) which refers to the overall colour of the animal. They are smooth-skinned with a pale red-brown back and contrasting bright white belly and inner thighs.

Visible male / female differences: Only males bear horns. Females are slightly larger and have two pairs of mammae between their hind legs.

Diet: These are very selective grazers and browsers. Browsing includes leaves and fine stems of forbs and woody plants. They also eat berries, fruit, pods and dig for tubers and bulbs. Steenbok are fairly independent of water and obtain most of their moisture requirements from the food they eat.

Behaviour & Habits: They occur solitarily or in pairs during the breeding the season. They are preyed upon by larger eagles, jackal, caracal, serval and other predators. The steenbok is a fast runner and zigzags when taking flight. It enjoys resting up in stands of dense grass and under low bush. Steenbok are also known to take refuge underground in old aardvark holes. Steenbok have the unusual habit of scratching sand over their scat. When alarmed, they dash away for a short distance. If not pursued, they will stop and look back to try and identify the cause of the disturbance. They are most active during the day, especially in the cool of early mornings and late afternoons.

Tactics:
If you are hunting steenbok specifically, begin by looking for them or their sign in appropriate habitat. Steenbok are largely independent on water, so waiting to shoot them from a blind over a waterhole will, more often than not, be unsuccessful. Bowhunting steenbok is difficult as most of these animals are shot opportunistically while the hunter is spot-and-stalking for other species. They are quite vigilant and it is advisable to use appropriate camouflage gear and approach from downwind, as they are quick to take flight when they get a whiff of human scent. Once they are on alert it is very difficult to approach within bow range.

Shot placement: Steenbok are thin-skinned, small and light-boned animals and do not present any arrow penetration problems. They can be shot from virtually any angle if the arrow is aimed to end up in the vitals. The problem is that the heart/lung target area is small and steenbok are very prone to string-jumping. Shots over 25 yards should not be attempted.

Follow-up: Steenbok can have long flight distances when wounded. Ensure that you wait at least 20 minutes before following up, as a wounded animal will flush easily and run off when approached. These animals have a small blood volume and do not leave heavy blood trails, but bleed out quickly when hit in the vitals and do not run far before expiring.

See All Posts By This Author
PrevPreviousCommon Duiker
NextBlesbokNext