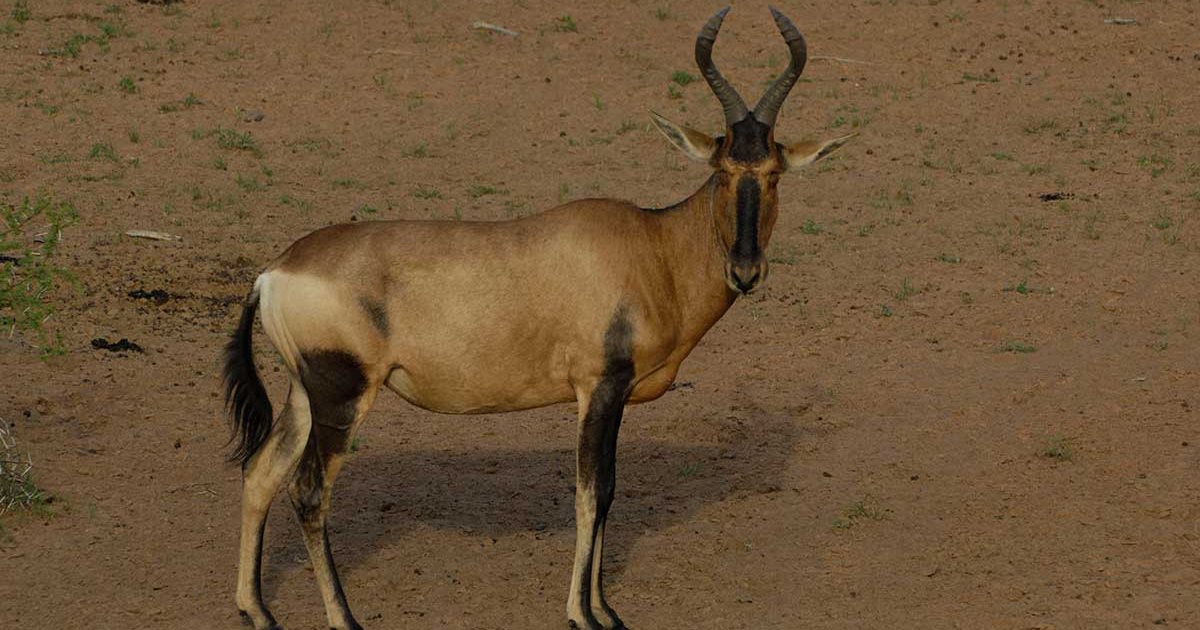 ABOUT THE RED HARTEBEEST:
Description:
Colour varies from rich red-brown to fawn. A darker saddle, more distinct in males, runs from the shoulders to the base of the tail, broadening out over the rump. The top of the muzzle and the forehead are black. A black stripe runs on the front of the shoulders down onto the forelegs. The Red Hartebeest is black high on the hind legs whereas Lichtenstein’s hartebeest lacks these markings. All the black markings are glossy. The rump is pale yellow or cream-coloured. There is a brush of longer, black hair on the tail. The preorbital glands are well developed and open onto a black patch just in front of the eyes. The head is narrow, its length exaggerated by the horns. The horns rise straight up, flaring outwards and forwards and then bend sharply backwards. Both sexes have horns, heavily ridged almost to the tips. There is a distinct hump on the shoulders, and the outline of the back slopes down to the rump.

Diet:
Hartebeest are selective grazers and browsers. Grasses and herbs make up about 75% of their diet while the rest of the diet is made up of leaves, fruit, seeds and pods. Hartebeest are dependent on daily drinking water and can go several days without drinking. Where water is available they will drink every 2 – 3 days. When no water is available, they will eat melons and dig for tubers.

Behaviour & Habits:
Hartebeest are most active in the early morning and late afternoon. They rest in shade in the summer and in the open in the winter. Hartebeest are highly adapted to hot and dry conditions. The metabolic rate is low and blood going to the brain is cooled by heat exchange with blood coming from the nasal membranes.

Small herds of up to 20 are formed. Mature bulls defend territories of 100-400 ha throughout the year in dry areas and control harem herds of females and juveniles of both sexes. Non-territorial males form bachelor herds in unfavorable habitat. Some adult males are solitary.

Territories are defended by fierce fighting involving charges, horn clashing and horn wrestling, when both combatants go down onto their knees for better leverage. Fighters’ horns may jam together and skulls with interlocking horns are sometimes found. Territories are marked with preorbital gland secretion, by thrashing vegetation with the horns, and by defecating and urinating in middens.

It is one of Southern Africa’s fastest antelope and can reach speeds of 70 km/h. Calves that cannot keep up with a fleeing herd drop flat on the ground in an attempt to avoid detection. Females leave the herd to give birth. A newborn calf lies hidden in tall grass while its mother grazes; she returns at intervals to clean and suckle it.

HUNTING THE RED HARTEBEEST:
Tactics:
Because of the open habitat that hartebeest prefer, it is quite difficult to get within bow range to them on foot. When alarmed, they will run off and stop a safe distance away and look back at the perceived threat before disappearing into the bush.

Hartebeest can be hunted successfully from blinds and tree stands over waterholes, although Hartebeest do not need to drink water every day. They can go 2 – 3 days without water and can cover great distances between waterholes. This makes them a real challenge to hunt with bow and arrow.

Shot placement:
Hartebeest are not thick-skinned but have a heavy bone structure. A broadside or quartering-away shot into the heart/lung area is the only recommended shots.

Follow-up:
Wait at least 30 minutes before following up on a good heart/lung shot. Hartbeest are fast runners and can go 150 yards on a good lung shot. Wait 3 hours on a suspected liver shot and at least 6 hours for a gut shot. Hartebeest are not very aggressive, but downed animals should be approached with caution.