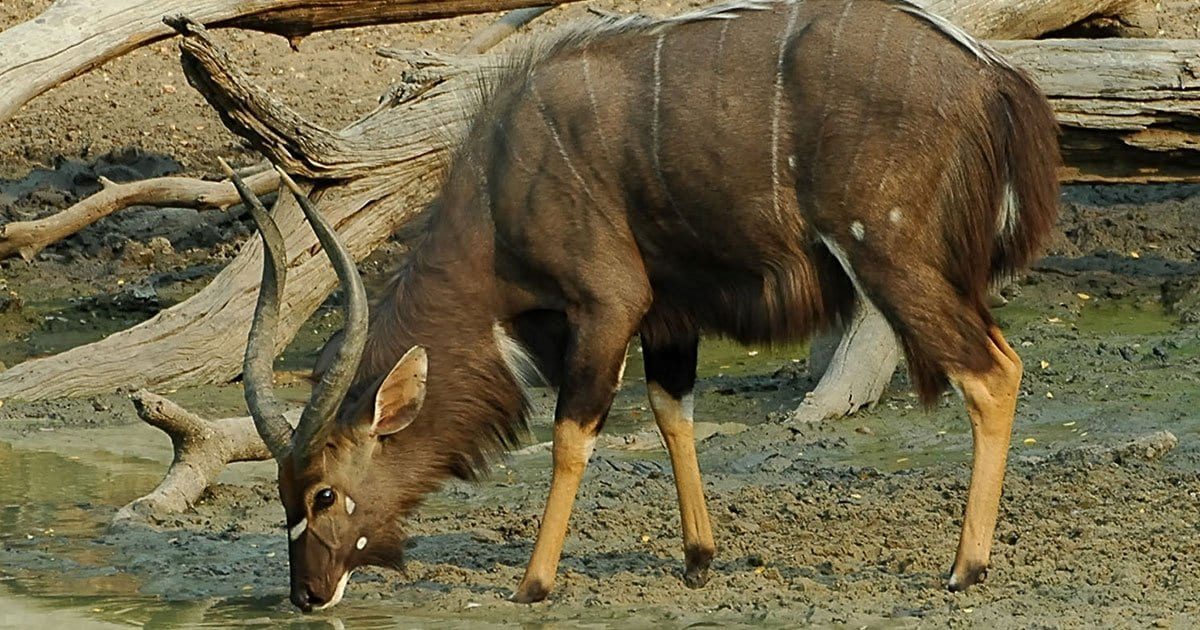 ABOUT THE NYALA:
Description:
Males of 2 years and older are slate gray to dark brown with up to 14 distinct white stripes across the back and down the flanks, and white spots on the thighs and belly. The bottom half of each leg is bright yellow, with a dark brown or black band separating this from the colour of the body. A mane of long hair running from the top of the head to the root of the tail, the hair is white at the tips, producing a white stripe down the middle of the back when the mane lies flat. Both sexes have a white spot below the eyes as well as another spot lower down and further forward to the side of the face. Short white bars in front of the eyes almost meet on top of the muzzle. A long, shaggy fringe of dark hair runs from below the jaw down the underside of the neck, chest and belly and onto the undersides of the hind legs.

The ears are long with a reddish tinge on the back, the tail is dark and bushy. Females and young are a bright chestnut with up to 18 distinct white lines across the back and down the flanks. Juveniles appear completely different from adults, young males begin developing adult colour at 14 months. Adult males stand about 44 inches (112 centimetres) at the shoulder and weigh 236 pounds (107 kilograms) and females are 38 inches (97 centimetres) and136 pounds (62 kilograms).

Visible male / female differences:
Only males bear horns and manes and are much darker coloured. Females have two pairs of mammae between their hind legs.

Diet:
Nyala browse and graze according to seasonal and local availability of grass and broad-leaved plants. They take a wide range of species and will eat both fresh and fallen leaves, shoots, fruit, flowers and bark. Males eat almost twice as much as females.

Nyala are dependant on surface water and drink regularly.

Behaviour & Habits:
Nyala are most active at dusk continuing into the night, resting in the middle of the day and after midnight. Nyala move onto grassland to graze and does so only at night in areas where it is disturbed. They often associates with vervet monkeys or baboons to feed on the fruit and leaves that they drop from trees. They are sometimes solitary or in herds of up to 30, usually up to 6. No permanent social bonds exist beyond a mother and her two youngest offspring. Young males leave at two years old and joins a bachelor herd. Nyala are not territorial. Males dig up soil and thrash bushes with their horns. Status display involves raising the mane and stately parading past the opponent with very slow, high steps of the bright yellow legs, with the head down and the horns pointed forward, and the tail curled up over the back to show its white underside. Serious fights are rare but can be fierce and sometimes fatal. Females give birth in thickets. Lambs lie hidden for 18 days. Nyala react to the alarm calls of baboons, impala and kudu.

HUNTING THE NYALA:
Tactics:
Nyala are generally not as vigilant as many other species. They can be successfully hunted using walk-and-stalk or spot-and-stalk methods. They will often stand and watch a hunter approach, but will dissapear into the thickets before the hunter can get within bow range. Wear good camouflage and stay downwind to avoid detection. Also watch out for vervet monkeys, baboons and impala that might give alarm.

Due to the fact that nyala drink water regularly, they can also be successfully hunted from blinds over waterholes. Nyala usually drink at dawn and dusk.

Follow-up:
Wait at least 30 minutes after a good heart/lung shot. Nyala will run for heavy cover when shot. Due to the habitat that nyala frequent, you will probably lose sight of it shortly after the shot. Although nyala are not as aggressive as their cousin, the bushbuck, a wounded animal should be approached with caution. Wait 2-3 hours before following up on a suspected liver shot and at least 6 hours for a gut shot.