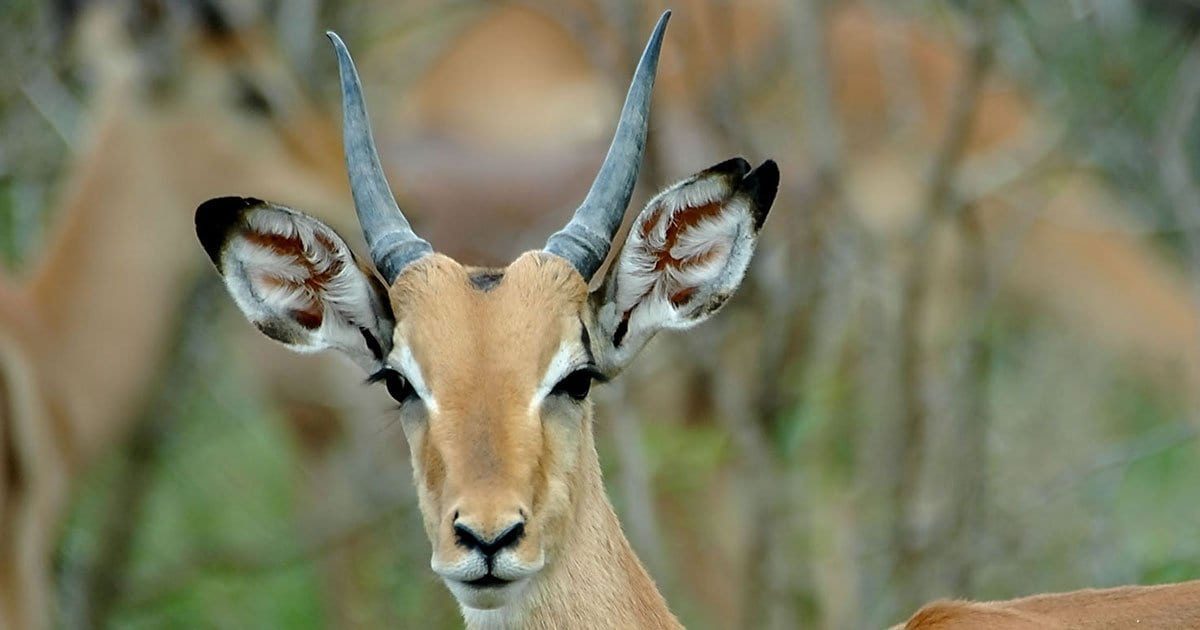 ABOUT THE IMPALA:
Description:
“Rooibok”, the Afrikaans name, which literally mean “red buck”, is very descriptive of this very elegant antelope. Impala are one of the most beautiful and graceful antelope in Africa. Adult males (rams) stand about 35 inches (90 centimetres) tall at the shoulder and weigh about 119 pounds (54 kilograms). Adult females (ewes) are slightly smaller and have an average body mass of about 90 pounds (41 kilograms).
The upper parts of the body are a rich reddish brown colour. The flanks, from behind the shoulders, are a pale fawn colour with reddish undertones. The underparts are pure white. There are white patches around the eyes, on the inside of the ears and on the muzzle and throat. There is a dark brown to blackish patch high up on the forehead. A long, narrow, vertical black stripe on either side of the tail stands out in sharp contrast to a pale, fawn colour. The legs are long and slender. Above the fetlocks on the hind legs is an oval patch of dark hair that overlies a glandular area of the skin. The top of the tail is black and this colour narrows down to the tip and extends along the back as a thin stripe. The tail is white underneath and along the sides. The inside of the legs is lighter than the outside. The tips of the ears are black.

Diet:
Impala are very selective grazers and browsers. They eat flowers, fruits, pods, bark and fallen leaves, according to the availability of different food types, which changes with season and locality. Grass is preferred.
Impala usually stay within about 8 km from the nearest available surface water. They can survive for short periods without water from the moisture content of their plant diet and by licking dew.

Behaviour & Habits:
Impala are active mainly during the day. Females and young live in breeding herds, usually of about 6-20, which often include a few adult males. In January bachelor herds fragment as males’ testosterone levels escalate. Fighting becomes more frequent and intense and males thrash bushes with their horns. They urinate and defecate in large middens and scent mark by rubbing their foreheads on twigs and grass. Intruders are deterred by snorting, chasing and threats with the horns. Persistent intruders are attacked: fights involve charges and wrestling with locked horns, and are short but serious; injuries and deaths are not uncommon. Losers are pursued and gored in the flanks if overtaken. Herd vigilance is important for detecting predators. Within each herd there will nearly always be at least one animal not feeding or drinking at any particular time. Sudden alarms cause herds to scatter explosively in all directions, with graceful leaps up to 3 m high and 12 m long. They jump through narrow gaps in undergrowth and fences.
The incisor teeth are loose in their sockets so that they can be used to comb ticks out of the coat, and impala spend more time grooming than other antelope. They are also the only one of the medium and small antelope that usually have oxpecker birds on them. Reciprocal grooming between herd members is an important means of removing ticks from areas that each animal cannot groom for itself. Territorial rams do not have time to groom, and they carry six times more ticks.

HUNTING THE IMPALA:
Tactics:
Impala are generally vigilant animals but the habitat they frequent makes the bowhunter’s task a little easier. These antelope are equipped with very acute senses – good eyesight, good hearing and excellent olfactory ability.
Impala are difficult, but by no means impossible, to stalk on foot, as long as the hunter is patient, moves at the appropriate time, and slowly and quietly. When impala have been alerted to something, they immediately stop what they are doing. They stand tall and erect with ears pricked and rotated towards the source of disturbance and stare fixedly at any given spot. They give audible warning by forcing air through their nostrils. Foot stamping is common. At this point, if you are the cause of their interest and assuming you are properly camouflaged, stand dead still. After a few minutes their curiosity might wane or be satisfied and they will settle down again and perhaps give you the opportunity for a shot. If their curiosity turns into suspicion they won’t hang around for long but will trot off to a safer distance and look back to confirm their suspicions. This is usually well out of bow range. If the suspicion turns into a perceived threat they will scatter at breakneck speed in all directions.
Impala drink water at regular intervals and shooting them from a blind is therefore one of the most successful techniques. Impala are sometimes very nervous when approaching a waterhole, especially if there are predators in the area. This can often be observed as skittishness. Because they are on alert when coming to drink, they respond with quick reactions to any perceived threat, whether it is something seen, a smell or a sound.
A tense impala “string jumps” an arrow and it is therefore wise to shoot only when the animal is relaxed and looking away from you.

Shot placement:
Impala are not tough animals. They have thin skin and light bone structure, which do not present any problem to sharp, broadhead-tipped arrow. As in most species, the two best shots are a broadside and quartering-away shot into the heart/lung area. For ethical reasons frontal or rear-end shots are avoided.

Follow-up:
Wait at least 20 minutes before following up on a good heart/lung shot, unless you have seen the animal go down. Wait 2 hours for a suspected liver shot and at least 6 hours for a gut shot.
When wounded, impala usually look for cover to lie up in. Like all wounded animals a wounded impala should be treated with caution but need not be considered dangerous.