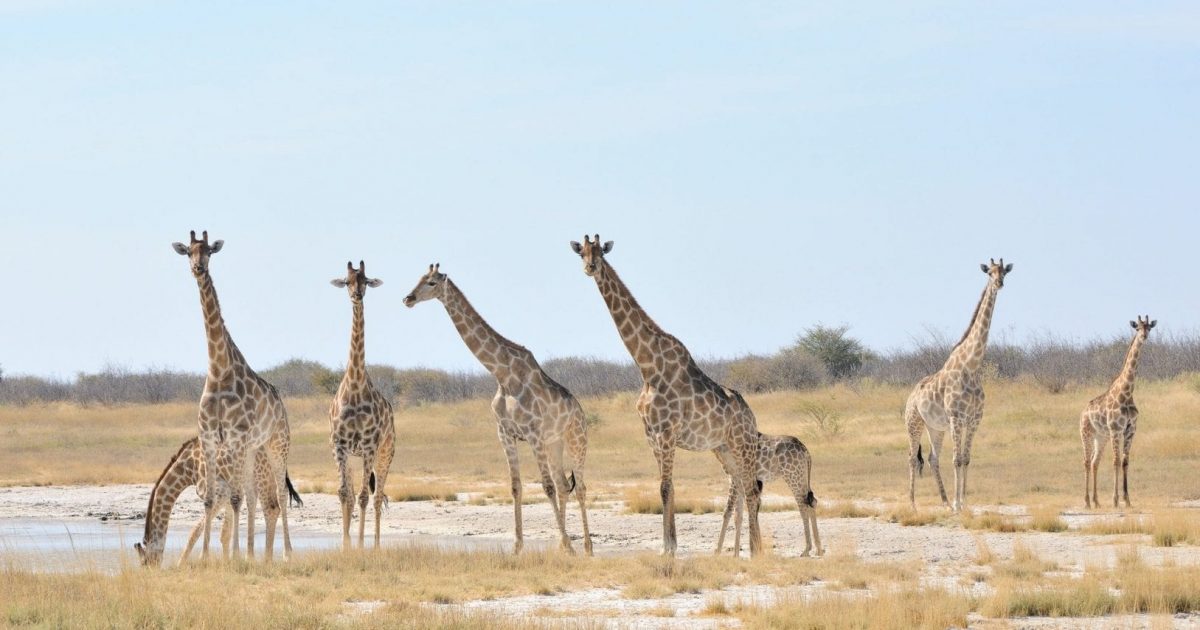 Southern Africa’s tallest mammal. Covered with irregular patches of fawn, chestnut brown, dark brown or nearly black, on a cream/buff background. A pair of short, thick horns is placed on top of the head, covered with hairy skin except at the tips. Mature bulls and old cows have at least one bony protrusion in the middle of the forehead with often extra lumps on the head in other places. A mane of stiff, dark brown hair runs down the back of the neck. There is a whisk of long, dark hair on the end of the tail. Each foot has a cloven hoof. Females have two pairs of mammae between their hind legs. Average male shoulder height is 158 inches (4 metres) and females 138 inches (3.5 metres). Males weigh 2,600 pounds (1,200 kilograms) and females 1764 pounds (800 kilograms).

Males are larger and darker than females. Males have thicker horns, and have a lump on the forehead. The horn tips are bald in males and old females while hairy in younger females.

Giraffe are exclusive browsers, taking leaves, fresh shoots, flowers, pods, and fruits from various trees. Acacias are the most important source of food. They eat soil to obtain minerals and very commonly chew bones, especially in areas where the soil is deficient in phosphorus.

Giraffe have very gentle natures but can defend themselves successfully against large predators such as lion by kicking out with sharp and heavy hooves. Many a lion has ended up dead or severely injured after having tangled with a giraffe. They are mostly silent animals and only occasionally utter moans, snorts and grunts.

Bulls tend to feed at full stretch, with their necks more vertical and their heads tipped upwards. 90% of feeding is done above the reach of competing browsers such as Kudu. Cows feed with their heads tipped downwards and their necks angled forward. The extra reach of bulls reduces competition with cows for food, but makes them less able to keep watch for predators while feeding.

Gregarious by nature, giraffe are usually found in groups of 2 – 3 animals. Herds of between 10 – 12 individuals are not unusual. Old bulls are sometimes solitary.

Males challenge each other and fight by the curious behaviour called “necking”. They stand side-by-side, facing opposite directions. Heads are lowered and swung in the direction of the opponent with blows being directed towards the body or neck.

Giraffe are one of the easier animals to find and get close enough to for a shot with a bow. They are generally vigilant animals and might be aware of your approach, but owing to their inquisitive nature will allow you to approach quite close to them before moving off. It is not unusual for them to move off a short distance and then turn and stare back at you. Sometimes their curiosity will get the better of them and they will approach closer to have a better look. Giraffe appear to rely more on sight and hearing than on scent to monitor their surroundings.

A hunter clothed in appropriate camouflage garb and making use of correct stalking techniques should have little trouble getting close enough for a bow shot.

Giraffe are thus suitable candidates for walk-and-stalk and spot-and-stalk hunting. Shooting from a blind over a waterhole will also work as long as the bowhunter has the patience to wait for the animal to approach to within bow range.

Giraffe are thick skinned, heavy boned animals with dense muscle tissue. They are wide-bodied so a substantial amount of tissue must be penetrated to reach the vital organs. The most reliable shot to take is a broadside heart/lung shot.

Wait an appropriate time before following up. A poorly placed shot will result in a long and exhausting follow-up so make sure of your shot. Giraffe are generally not aggressive animals, but exercise caution when approaching a downed animal as a flailing hoof could quite easily kill the unwary hunter.