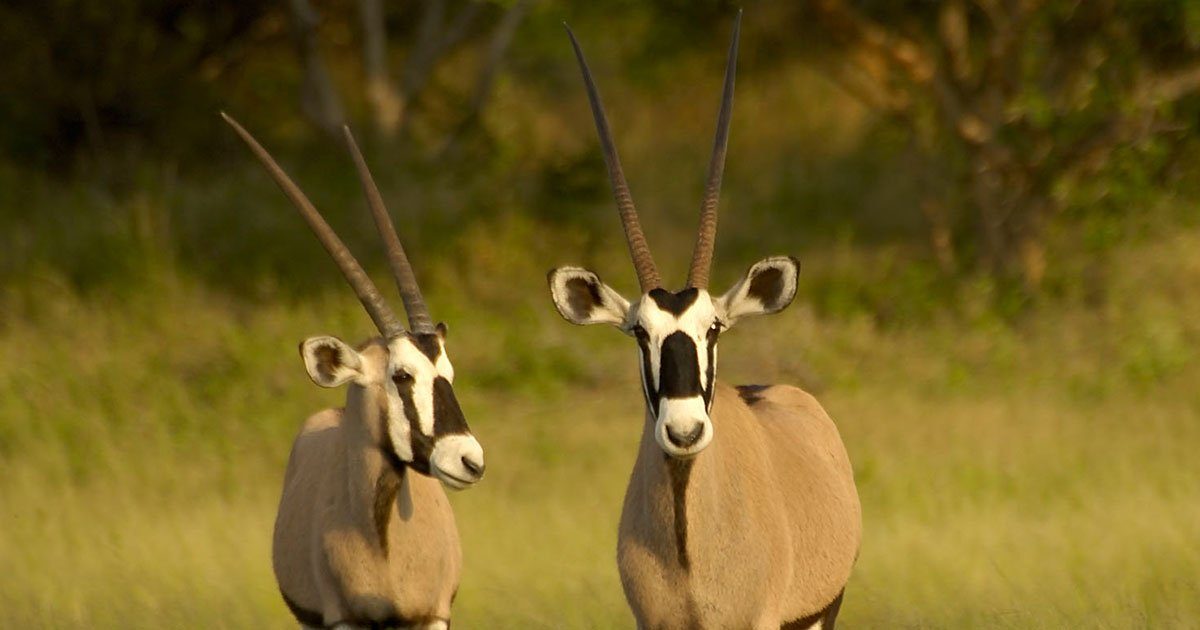 ABOUT THE GEMSBUCK:
Description:
The gemsbuck is a large antelope with striking patterns on the head and body. The head is white with a conspicuous black “harness”. A black patch on the forehead at the base of the horns is joined by a narrow, black stripe to a broad patch of the same colour on the blaze. A black patch extends from the base of the horns downwards across the eye to the corner of the mouth, where it unites with the nasal patch and spreads to the underside of the jaws. The neck and body are a fawn to pinkish grey. Underparts are white with a broad, dark band separating the flanks from the belly. A narrow, dark brown strip extends from the shoulders down the middle of the back, widens across the rump and then narrows down the tail. The tail terminates in long, dark brown tassels which hang down to the hock. Legs are white with dark brown patches on the upper third. There are thin, dark brown strips along the frontal aspects of the legs. A thin dark stripe runs down the midline of the neck from the jaw to the sternum. There is small but definitive dewlap.
Bulls measure about 47 inches (1.2 metres) at the shoulder and have a mass of approximately 529 pounds (240 kilograms). Cows are lighter and weigh in at around 463 pounds (210 kilograms).

Visible male / female differences:
Males and females are difficult to tell apart unless the udder or scrotum is visible. The penis sheath is also visible on bulls. Bulls’ horns are thicker and usually shorter and blunter than that of females.

Diet:
Gemsbuck are primarily grazers, but will browse on bushes and forbs when grass is in short supply. They prefer to graze at night when it is cooler and when the moisture content of vegetation is higher. By producing highly con-
centrated urine and allowing body temperature to rise without sweating, the are able to survive without drinking. They are also fond of wild cucumbers and tsamma melons when available. They obtain minerals by eating soil and
salts at water holes.

Behaviour & Habits:
Gemsbuck spend more than half of the day inactive, in shade if possible, to save energy and water and to avoid overheating. Body temperature is allowed to rise to 113°F (45°C) during the day, then excess heat is lost at night. Blood flowing to the brain is cooled by heat exchange with blood flowing from the nasal membranes in a network of vessels called the carotid rete. They graze for long periods at night when the moisture content of the vegetation is higher.

Breeding herds contain both males and females. Groups are smaller in the dry season. Bachelor herds are rare and usually contain fewer than five animals. Both males and females are aggressive and there is a dominance hierarchy in each sex in a herd. Dominant animals signal their status by holding their heads high, threaten by tipping the horn tips towards the subordinate, and by ducking the head. Gemsbuck usually stay more than a horn’s length apart because of their aggression toward each other, especially around water holes. In skirmishes the two animals cross horns near their bases and push and twist against each other. In serious fights between bulls the combatants stand alongside one another and stab backwards and sideways over their shoulders. Territorial and herd alpha bulls dominate females and other males, and are recognizable by their head-high stance and larger scrotum. Territories are marked with small, neat dung piles, deposited in a very low crouch so that the pellets do not scatter, secretion from glands between the hooves of all four feet deposited by pawing the ground or while walking around, and by thrashing the leaves, bark and branches off bushes. Only territorial or alpha bulls are sexually active. Herds bunch around calves if predators are detected, and the adults use their horns in defence. Gemsbuck defend themselves against predators by slashing with their horns while covering their rear by backing into a thorny bush. Gemsbuck find salty mineral deposits and lick it, often making substantial holes in the process, visiting them frequently.


Tactics:
Gemsbuck are quite vigilant and can be a real challenge to hunt on foot, due to the open environment that they inhabit. The most effective method for bowhunting gemsbuck is to hunt them from a blind or treestand over a waterhole or mineral lick. Gemsbuck drink on a regular basis if water is available and is quite partial to mineral
licks. Alternative methods include constructing a blind in a shady stand of trees that show signs of being used as a resting spot during the heat of the day or by waiting in ambush with appropriate camouflage.

Shot placement:
Gemsbuck are big animals. Broadside or quartering-away shots are the only recommended shots. Frontal or rear-end shots should not be attempted.

Follow-up:
Wait at least 30 minutes before following up on a good heart/lung shot, 2 – 3 hours after a liver shot and 6 – 8 hours before you begin looking for a gut-shot animal. Gemsbuck can be very dangerous when wounded and have been recorded to wait in ambush for the unwary pursuer.