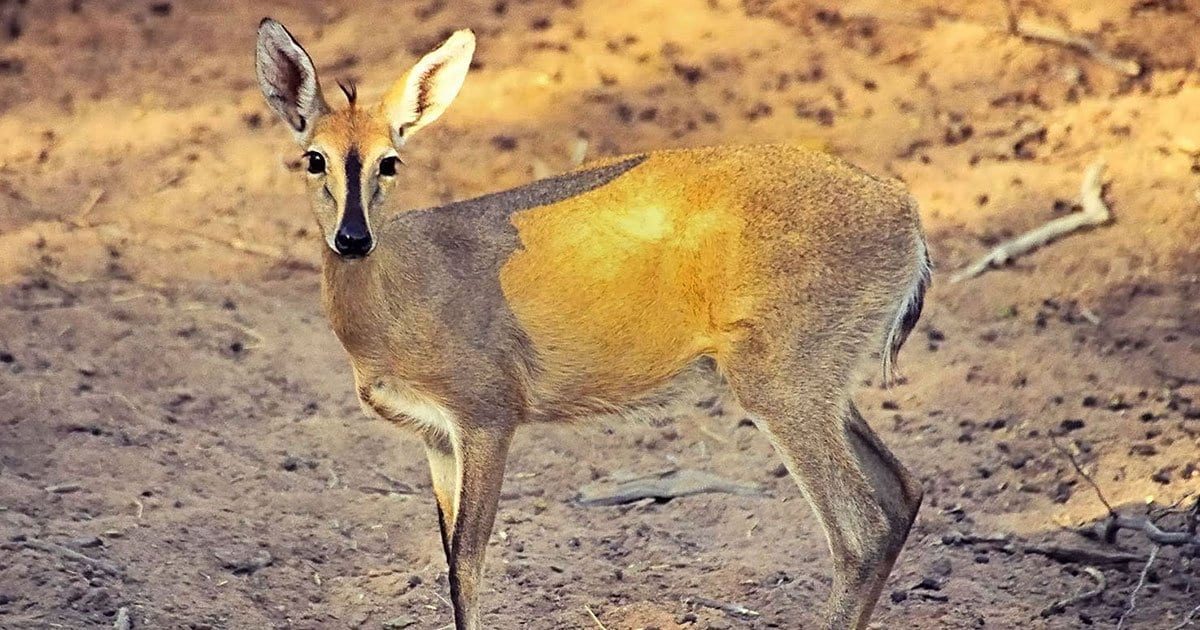 Description:
The term “grey” can be misleading as the animals sometimes have a reddish appearance. This is one of the 19 sub-species of duiker. They are a small antelope standing about 24 inches (61 centimetres) at the shoulder and weighing about 40 – 45 pounds (18 – 20 kilograms). The colour of this duiker is quite variable, ranging from a yellowish tawny colour, through rufous, to greyish brown. It is generally lighter below. There is white under the throat and the upper parts of the legs, which are normally brighter than the body. The fetlocks are black. The forelegs have a black line running halfway up the leg. The hind legs have a similar black line, but it does not extend as far up as that of the front legs. The tail is black above, with white on the sides and underparts. The pointed ears are brown on the outside and white on the inside. There are conspicious pre-orbital glands in front of the eyes.

Visible male / female differences:
Only the males have horns. Females are slightly larger and have two pair of mammae between the hind legs.

Diet:
Duiker are almost entirely browsers, feeding on leaves, twigs, bark, young shoots, pods and fruit of a wide variety of plants. They are fussy eaters and eat the newly formed leaves, buds and twigs on the end of branches. There are even observations in the scientific literature, eating small birds, lizards and mopani worms. Duiker are relatively independant of surface water and are seldom seen drinking.

Behaviour & Habits:
They are solitary animals and are rarely seen in male-female pairs. Scent-marks are produced by the preorbital glands and glands between the front hooves. When threatened they will lie still or freeze, dashing away at the last moment if approached closely. They run with a distinctive diving, zigzag motion from which comes the name duiker, which is Afrikaans for diver. The horns and sharp back hooves are used as defensive weapons and can cause severe wounds.

Tactics:
They are not easy to hunt with the bow. They are shy and secretive and frequent dense undergrowth. The situation is further complicated by the fact that thay make infrequent use of waterholes. However, they do sometimes feed around the waterholes and may wander within bow range for shot from a blind.

Another option is to walk-and-stalk in appropriate habitat where you know they occur. You must be well camouflaged, constantly monitor wind direction and stop frequently in deep shadow to observe your surroundings. In this way you improve your chances of coming across one. Cool, overcast days are especially good times for a hunt, as they will be actively walking about and feeding under these onditions.

Another place that might be productive is under trees bearing fruit. When vervet monkeys and baboons feed on fruit, they often drop partially eaten fruits, on which duiker sometimes feed.

Shot placement:
They are small and compact and can be shot from virtually any angle when aiming for the vitals. They have very fast reflexes and they tend to jump the string, especially when nervous. For this reason shots over 20 yards should not be attempted.

Follow-up:
Wait at least 30 minutes before attempting to recover the animal. If it runs off on being shot, try to keep it in sight for as long as possible and listen for sounds of it’s flight as this will help in the search. When threatened or hurt a duiker heads into thick cover and “freezes” until you almost stand on it. When following up, learn to visibly search out dense stands of undergrowth. Wounded duiker has been known to inflict injury on humans, so do not underestimate this little creature.