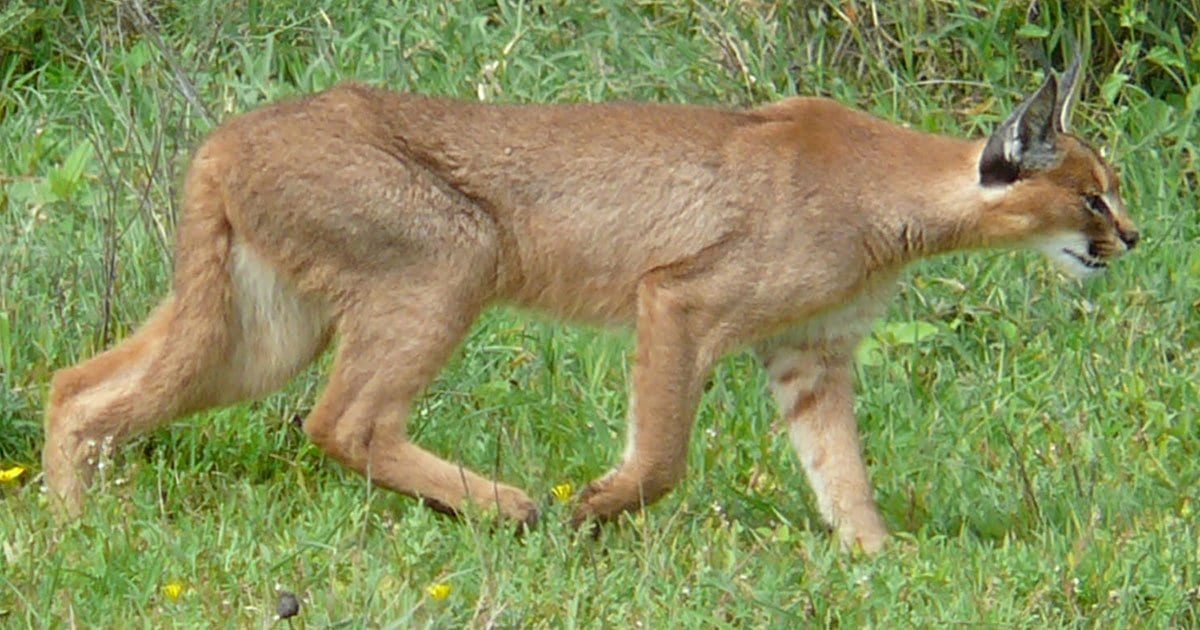 
Description:
The largest of the African small cats. Powerful build, especially adult males. Uniform body, color varies with locality, usually brown-red. The underpants are white with indistinct spots. Distinctive black markings on the face at the base of the whiskers, from the inside corners of the eyes to the nose, and above the eyes. The ears have long black tassels hair on the tips. The back of the ears are black with a salting of silvery white. The tail is short. Average total length males 1,1 m, females 1m, head and body length males 87cm, females 82cm. Shoulder height 43cm; weight males 13kg, females 10kg.

Males and females look identical, with the male being heavier and more powerfully built.

Diet:
Caracal will catch mammals up to the size of medium-sized antelope weighing about 40 kg. Birds up to the size of guinea fowl, reptiles, amphibians, arthropods are also taken. Caracals rarely scavenge. They will return to kills if they are not disturbed.

Behaviour & Habits:
Caracal are solitary animals. They are nocturnal, but may be seen at dawn and dusk. Young males disperse up to 112 miles (180 kilometres) from where they were born.
Caracal employ the classical feline hunting method: prey is detected mainly by sight or sound, stalked, rushed at from close range, pounced on and grappled with the claws, and killed with a bite to the throat or the nape of the neck. With antelope and small stock, feeding begins at the soft skin inside the thighs. Fur may be plucked from prey. The hindquarters are eaten first and then the shoulder. The guts are not removed from the prey whereas the leopard removes the guts. Prey may be dragged into cover and stashed and covered. Caracals return to kills if they are not disturbed.


Tactics:
The nocturnal nature of caracal, combined with the fact that thay are hardly ever attracted to bait, make them extremely difficult to hunt with a bow. They are for the most part hunted on a very opportunistic basis. If a fresh kill is discovered, the hunter can wait in ambush, wearing good camouflage and waiting downwind of the carcass. Disturb the area around the carcass as little as possible. A makeshift blind can be built a short distance from the carcass using material from the surrounding area. If the caracal was not disturbed, it might come back to feed on it’s kill again.
Caracal may sometimes be called in using predator calls. In some areas in South Africa caracal are very successfully hunted using dogs, but this makes for an expensive hunt.

Shot placement:
Caracal do not present any penetration problems with a bow. They do not have heavy bone structure and a shot aimed at the vitals can be taken from virtually any angle.

Follow-up:
Wait at least 30 minutes before following up on a heart/lung shot. Caracal have sharp claws and teeth and can do serious harm when wounded or cornered. It is advisable to take a shotgun loaded with buckshot when following up on caracal. Although they are unlikely to kill a person, they can still cause serious injury.
When wounded, caracal will often hide in thick brush, aardvark holes, crevices in rocks, or any place that is difficult to access.