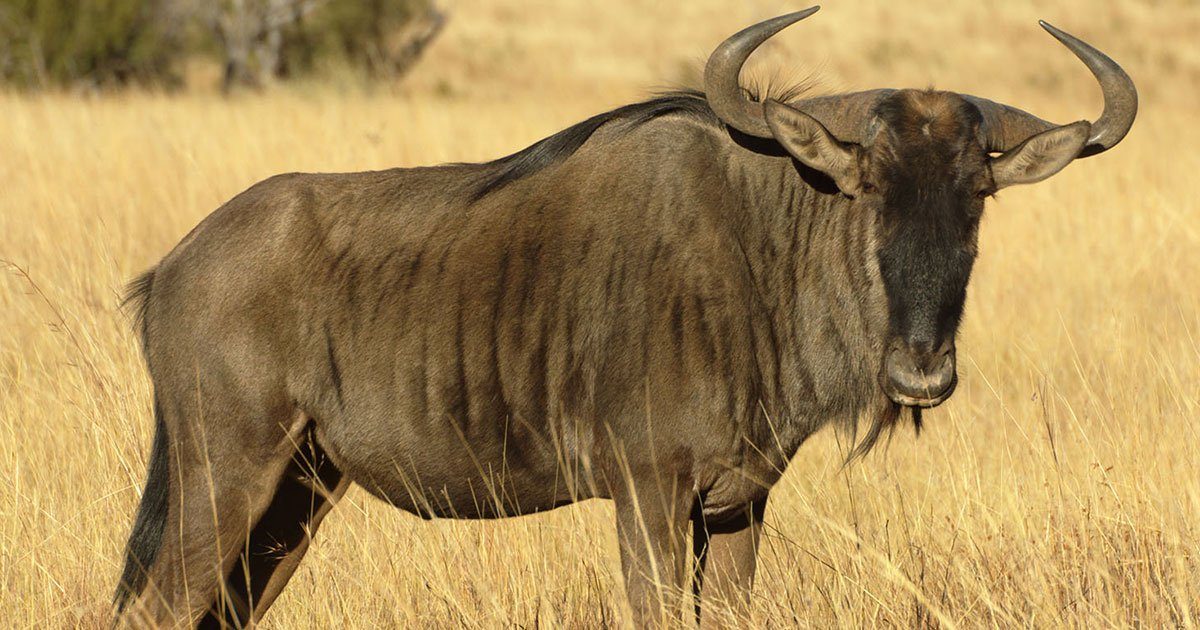 ABOUT THE BLUE WILDEBEEST:
Description:
Adult males are dark grey with a silver sheen and darker stripes on the sides of the neck, black on top of the muzzle and on the forehead, with a russet tinge to the forehead, shoulders and chest. Females and juveniles have more russet on the forehead and calves up to 6 months old are uniformly fawn. A mane of long hair runs along the back of the neck as well as a fringe along the throat. The tail has a long whisk of black hair at the end
and reaches nearly to the ground. Males stand about 55 inches (1.4 metres) at the shoulder and weigh around 550 pounds (250 kilograms). Females stand at 49 inches (1.26 metres) at the shoulder and weigh about 396 – 474
pounds (180 – 215 kilograms).

Visible male / female differences:
Males have heavier horns that grow from a much heavier boss. The penis sheath is visible in males.

Diet:
Wildebeest are non-selective grazers and prefer fresh growth less than 15cm high. They can survive without water by eating wild melons.

Behaviour & Habits:
Wildebeest are gregarious and social animals and bulls are territorial. Bulls that have been expelled from the breeding herds will form bachelor groups, but generally stay close to the breeding herds. They are mostly active during the day with peaks in the early mornings and afternoons. They avoid the midday sun by standing or resting in shade. If no shade is available, they will stand facing the breeze. About 50% of the time spent grazing is after dark. They drink water daily is more willing than most animals to drink muddy water.


Tactics:
Because of the open to semi-open habitat that wildebeest prefer, it is difficult but nevertheless possible to hunt them using walk-and-stalk and spot-and-stalk techniques. They are less vigilant and more inquisitive than many other animals and this allows one, at times, to get closer more easily than to other species. They do, however, often associate with other animals such as zebra (because of similar grazing preferences) and these more watchful animals can complicate a stalk by giving the alarm. Wildebeest often stand and stare at an intruder or even approach closer to satisfy their curiosity. Once they become suspicious, they snort and stamp their feet and if they feel threatened will wheel away and run off, often in single file. After the initial flight it is not unusual for them to stop and stare back at what caused their flight response.
Wildebeest can be successfully hunted from elevated blinds, ground- and pit blinds and treestands at waterholes or approaches along game paths leading to drinking points. They are water dependant and drink daily. This technique is especially effective during dry winter months when water availability is limited.

Shot placement:
Blue wildebeest are tough animals, well muscled in the forequarters, and with a relatively heavy bone structure. A quartering-away and broadside shot into the heart/lung area is the only recommended shots. Wildebeest do not have
very fast reflexes and are less inclined to jump the string.

Follow-up:
Wait at least 30 minutes before following up on a good heart/lung shot, 2 – 3 hours after a liver shot and 6 – 8 hours before you begin looking for a gut-shot animal. A wounded or cornered wildebeest can be dangerous and have been recorded as having caused human fatalities.