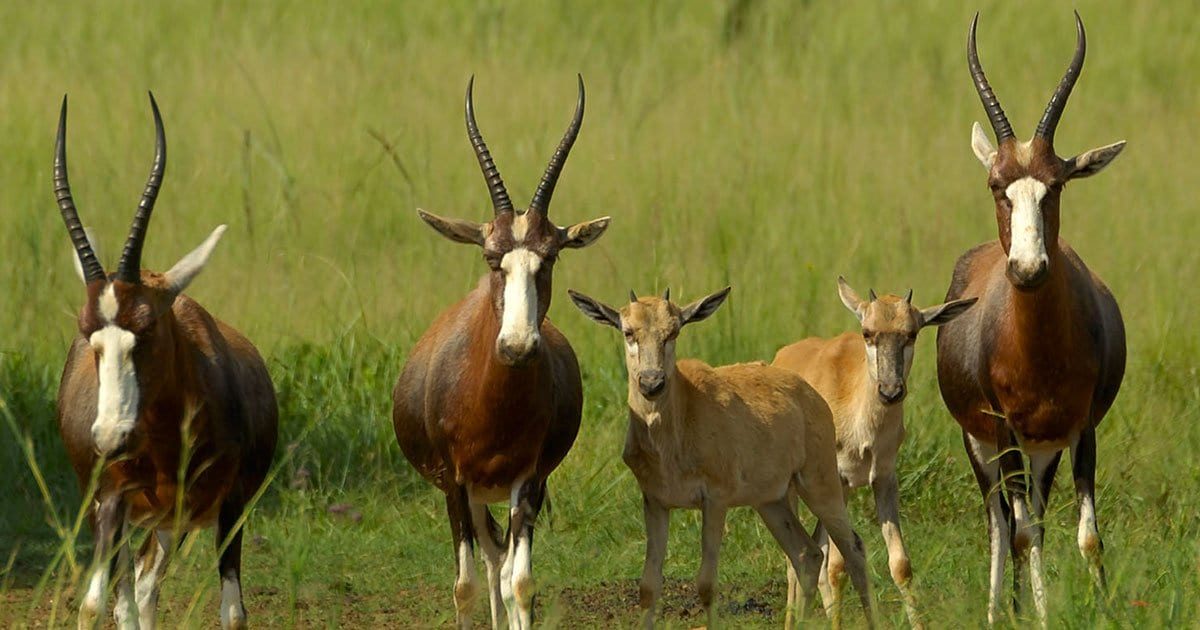 ABOUT THE BLESBOK:
Description:
Their name comes from the white blaze on the face which stretches from the base of the horns to the nose. These are medium-sized antelope that have striking patterns of white on the head, inside rump and inside of the legs. The remainder of the body in adults is a dark, reddish chestnut. Shoulder height is 33 – 39 inches (84 – 100 centimetres) and they weigh in at approximately 130 – 155 pounds (60 – 70 kilograms). The ears are long, pointed and white on the inside. Underparts are white to off-white. The tail is white below, with long brown hairs on the end, which stretch down to the hocks.

Visible male / female differences: Males are larger than females with thicker horns. The horns on males are generally lighter in colour than that of females. Females have one pair of mammae between their hind legs.

Diet: Blesbok are predominantly grazers, but there have been isolated observations of them browsing. They are very fond of new grass that grows after a recent burn and will move quite a long way between feeding areas and the closest water. They drink water during the day and have a daily water requirement of about three litres.

Behaviour & Habits: Blesbok are active in the early morning and late afternoon. They rests in shade during the heat and shelters in thickets on winter nights. In very hot weather it may stand facing the sun, head down. Males without territories form bachelor herds. Territories are marked with dung middens. The territorial males lie in a midden to pick up the smell of his area. Both sexes and all ages deposit preorbital gland secretion on grass stalks. Secretions from glands between the front hooves are deposited while walking and when territory residents paw the ground and scrape dung. Territory occupation is advertised by standing sideways on to intruders, foot stamping, horn swinging and digging up soil with the horns. Territories are defended by horn clashing which can escalate to becoming serious and are sometimes fatal. Territorial rams herd females by circling them with head stretched forward and tail curled up. Blesbok often have the peculiar habit of “nodding” their heads. The reason for this is that they are often infected by the larvae of parasitic flies of the Oestrus genus which lay their eggs around the nose of the

HUNTING THE BLESBOK:
Tactics:
When hunting blesbok in the Bushveldt, they can be hunted quite successfully using walk-and-stalk or spot-and-stalk methods. They are curious animals and sometimes do not move off very far when detecting a disturbance and, at times, almost appear stupid. Hunting them in open plains is a completely different kettle of fish, though. They can also be hunted very successfully from blinds over waterholes.

Shot placement: A broadside or slightly quartering away shot into the heart/lung area is recommen- ded. The bone structure of blesbok is not a major hindrance to arrow penetration in this area. Do not attempt frontal, rear end or running shots.