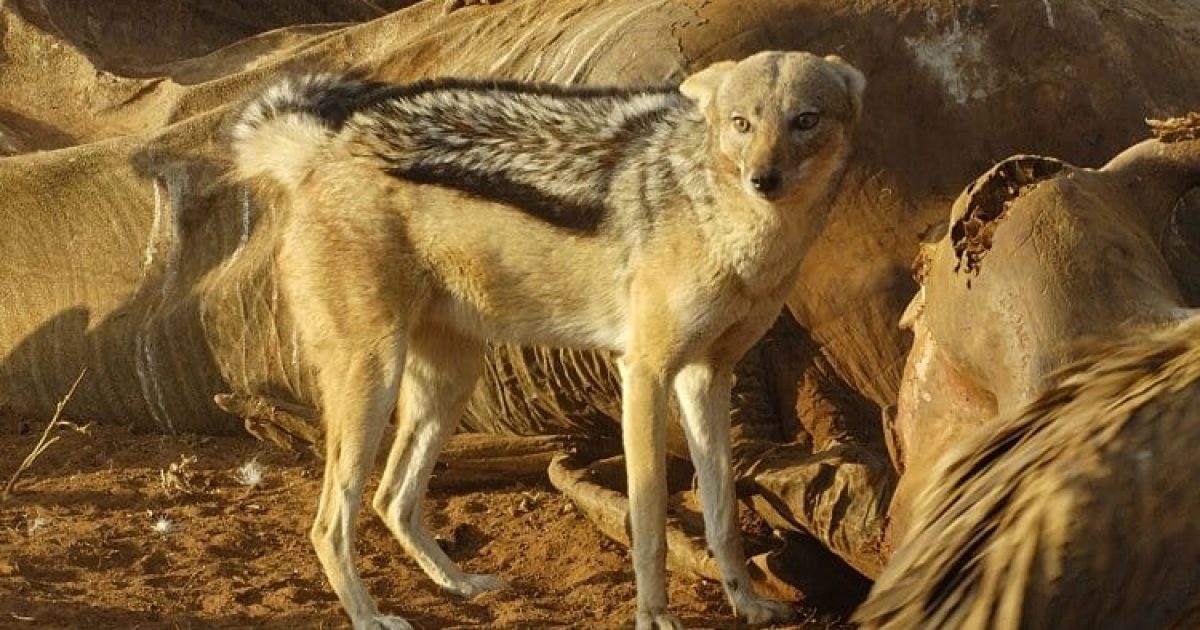 About The Black-Backed Jackal


Description of the Black-Backed Jackal:

Black-backed jackals stand about 16 inches (40 centimetres) tall at the shoulder and weigh up to 24 lbs (11 kilograms). They are brightly coloured and very fox-like with long ears that are broad at the base and pointed. The head is greyish-tinged and sandy along the muzzle. The body and legs are bright rufous with a broad, conspicuous black mantle on the upper parts stretching from the neck to tail and stippled with white, giving it a silvery look at a distance. It is widest over the shoulder, narrowing down towards the tail. The top of the mantle is whitish. The fairly long tail is quite bush rufous in colour with a black tip.

Males and females look identical with the males being slightly larger. They are generally very difficult, if not impossible, to tell apart at a distance.

Diet of the Black-Backed Jackal:

Black backed jackals are omnivorous, taking hares and rabbits, rodents, small antelope and the young of larger species, farm stock, small carnivores, birds, reptiles and amphibians, carrion, fruit, garbage, insects and other invertebrates. They frequently eat small portions of grass, presumably to aid digestion. They are fairly independent of water, but will drink when available.

Behaviour & Habits of the Black-Backed Jackal:

Jackals are most active at dawn and dusk, but there are some activity throughout the day and night; becomes more nocturnal in farming areas where it is hunted. They shelter at night in holes in the ground and rests during the day in shade or sunbathes in cold weather.
They move singly, in pairs, or small family groups consisting of the parents and young. Larger groups may sometimes be observed congregating around carcasses. The sound of large carnivores at a kill also attracts jackals, and they may follow large carnivores in anticipation of a kill.
Black backed jackals usually move at a trot but will move slowly with ears pricked when hunting. Their senses are particularly well developed, especially their sense of smell.

Hunting black backed jackal with a bow and arrow is a real challenge. They are extremely alert and cunning and getting close enough for a shot is not easy. The method most likely to result in success is to lure them to within bow range with predator calls or by hunting them over a carcass and waiting for them to come and scavenge. They might be attracted to live bait such as a small goat or a chicken. They may also visit waterholes and waiting in a blind might result in success.

Getting a shot can be difficult as black backed jackals rarely stand still for long. A side-on broadside or quartering-away shot is the best shot to take. Jackals are small animals and have quick reflexes and one should therefore aim for the target that will allow for the greatest margin of error.

Jackals generally do not run very far after a lethal shot and will often spin around on the spot before going down. Beware when approaching a downed animal, as jackals are sometimes carriers of rabies.

More game species of the bushveld.