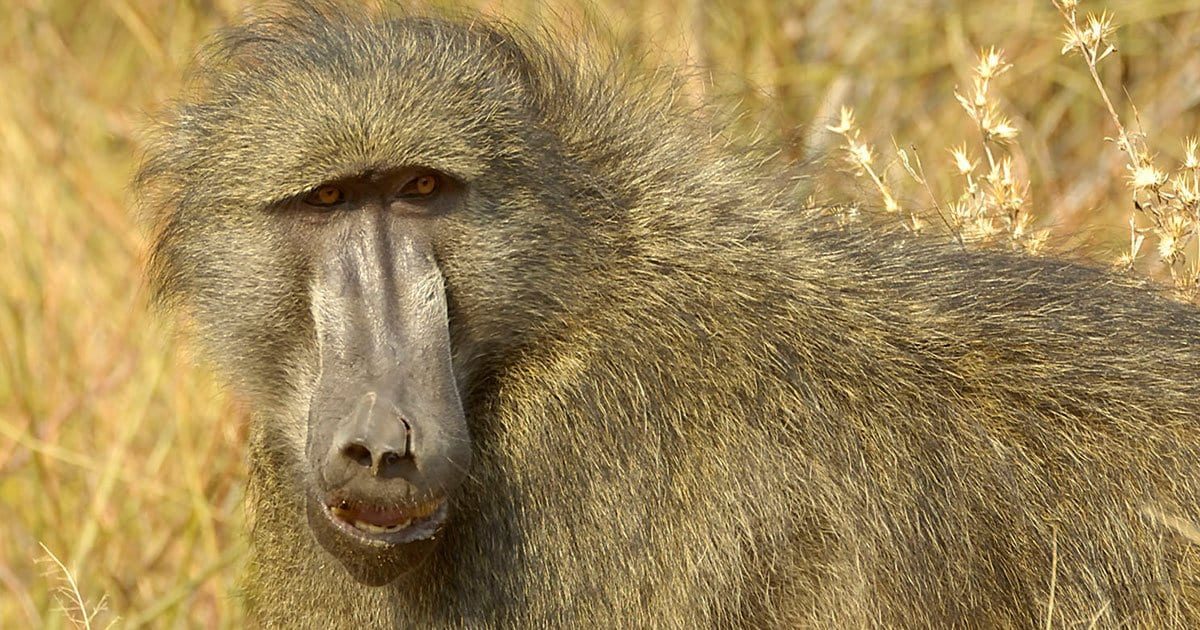 ABOUT THE CHACHMA BABOON:
Description:
The Baboon’s colour varies from brown-grey to dark brown or nearly black but is usually grey-brown. Adult males have a dark mane on the neck and shoulders. The hair is long and coarse. The backs of the hands and feet are dark brown or black. Young have black hair and pink skin. The ears have pointed tips, and the muzzle is long and broad. The limbs are long and powerful with the arms being longer than the legs. The first third of the tail is held stiffly upwards, with the end two thirds hanging down. There are callosites of thickened skin on the rump. The average total length of males is 69 inches (1.5 metres) and weigh 77 pounds (35 kilograms). The total length of females is 39 inches (1 metres) and weigh 33 pounds (15 kilograms).

Visible male / female differences:
Males can be distinguished from females by their larger size, longer muzzles and larger canine teeth. Callosities (thickened skin on the rump) meet in the middle below the anus in males instead of widely separated in females.

Behaviour & Habits:
Baboons are active during the day, sleeping at night in large trees or on cliff ledges. They are very social and live in female-bonded troops of between 4 and about 100 individuals with an average troop size of about 40. Troops are smaller in poorer habitats and larger in richer areas. There is usually more than one male in a troop. Females stay in the troop that they were born in; males emigrate and may move from troop to troop. Separate dominance hierarchies exist among the males and females. Males outrank females. Daughters inherit their mother’s rank. Male dominance depends on physical condition, and high rank is held for only 6-12 months, depending on sex ratios in the population. Females can rise in rank by forming alliances with close female relatives, or with male ‘friends’. Young ride under their mother’s belly; as they grow they change to riding sideways on her back, and then astride, using her tail as a backrest. Males are protective towards infants that are probably their offspring, and act as babysitters while the mother forages, probably to protect the youngsters from infanticide by immigrant males.

HUNTING THE CHACHMA BABOON:
Tactics:
Baboons are very vigilant and the troop will always have at least one sentry on lookout which will sit on a high vantage point where he can observe the surrounding area. This makes stalking them quite difficult. When stalking baboons, listen for vocal calls to find their location. Wear good camouflage and move slowly and keep in the shadows. Keep a sharp look out for the sentry. Alternatively, try to intercept a moving troop and wait in ambush.
Baboons can also be successfully hunted from blinds over waterholes and crop areas.
Baboons have excellent eyesight, so try to stay as far back in the blind as possible and keep movement to a minimum to avoid being detected.

Shot placement:
Baboons do not have heavy bone structure and do not present much arrow penetration problems. A shot directed at the vitals can be taken from virtually any angle.

Follow-up:
Baboons have been known to grab hold of the arrow and pull it out of the wound (where complete pass through was not achieved). This will usually open up the wound channel for a better blood trail. Wait at least 30 minutes before attempting to retrieve the animal. They usually do not go very far when shot.
Baboons are physically very strong, have long canines and can be very mean. A wounded or cornered animal can be very dangerous and should be approached with caution.