ABOUT THE KUDU:
Description:
One of the most elegant and beautiful antelope in Africa, the Kudu is tall and majestic. They are often referred to as the”grey ghosts of Africa”. Males are fawn grey, females tinged cinnamon. Old bulls become grayer and their necks become darker in the rutting season. A single narrow, white stripe runs down the middle of the back and 6-10 narrow white stripes run across the back and down the flanks. Males and females have a short upright mane from the top of the head to a crest at the shoulders. Adult bulls have a long fringe of hair underneath the neck. The ears are very large and mobile. There is a narrow white bar across the face just in front of the eyes, narrowly broken in the middle and white patches on the sides of the face. The top lip and chin are white. The tail is white underneath. Average shoulder height for males is 55 inches (1.4 meters) and 49 inches (1.25 meters) for females . Weight of males is 507 pounds (230 kilograms) and up to 660 pounds (300 kg), and females 346 pounds (157 kilograms).

Visible male / female differences:
Only males have horns. Females have two pairs of mammae between their hind legs.

Diet:
Kudu browse on a very wide range of plants. Acacia and Combretum species are preferred. They can become a serious crop and garden raider. Males break branches with their horns to get at foliage. They feeds below 70 inches (1,8 metres). Browses for only about a minute on each tree to avoid tannin formed by the tree in self-defence. They often drinks water at dusk.

Behaviour & Habits:
Kudu are most active in the morning and late afternoon. It sleeps before dawn and becomes more nocturnal where it is hunted hard. They are not territorial. Herds have home ranges which vary from 400ha and upwards in drier areas. Bulls roam more widely than cows but return to a fixed area. Cows, calves and sub adults form small family herds, usually with 6-7 and up to 12 members. Social grooming occurs in both family and bachelor herds. Temporary aggregations may form at water holes in the dry season. Males leave herds at 3 years old; adult bulls live alone or in bachelor groups of 2-6, joining female herds in the breeding season which is May-July. Dominance among bulls is based on size as well as displays of fighting ability. During the mating season prime bulls develop massive neck muscles, thrash bushes with their horns and dig up soil. Fights are rare and involve lunging, horn clashing, and wrestling with locked horns. Deaths occur from stab wounds and when horns become interlocked.

Kudu are alert and nervous when on open ground and stand motionless in cover to avoid detection. They run with their tails curled upwards, exposing the white underside as an alarm signal. Bulls run with their horns laid back close to their shoulders. Kudu are strong jumpers and clears 6.5 foot (2 meter) high fences with ease, and 10 foot (3 meters) under stress.

HUNTING THE KUDU:
Tactics:
Kudu are very wary and alert and have excellent hearing and sense of smell. Getting within bow range of a big bull on foot is a real challenge. Often, the only sign a hunter gets from a Kudu bull is an alarm call and the noise of him breaking through the brush. When using walk-and-stalk or spot-and-stalk methods, wear good camouflage and stay downwind to avoid detection and stop often in deep shadows to observe the surroundings. Kudu do not hang around when detecting a possible threat.

Kudu are also very successfully hunted from blinds over water holes and mineral licks, especially during the mating season (May to July).

Shot placement:
Kudu are large animals with fairly thin skin and a medium to heavy bone structure, which will cause penetration problems for quartering towards-, frontal- and back-end shots. The only recommended shots are broadside- and quartering away shots into the heart/lung area.

Follow-up:
Wait 30 minutes before following up on a good heart/lung shot, 2-3 hours for a suspected liver shot and 6-8 hours for a gut shot. Kudu will often head for thick cover when wounded, standing in a thicket while keeping a sharp eye out for danger. Although Kudu are not very aggressive, they can inflict serious damage with their horns. 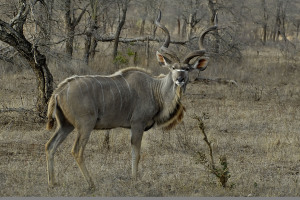 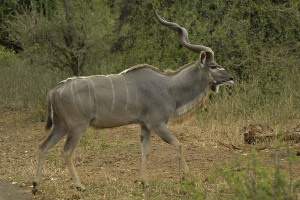 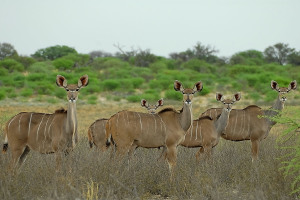 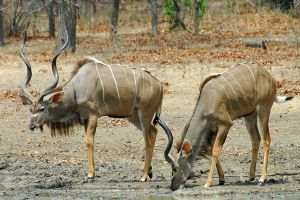