ABOUT THE CAPE ELAND:
Description:
The Largest of the African antelope, an adult eland bull stands about 67 inches (1.7 metres) at the shoulder and can weigh up to 1,980 pounds (900 kilograms). Eland are predominantly a reddish fawn to tawny colour, but usually darken with age. Mature bulls become more and more blue-gray, especially on the neck. The ears are narrow and pointed.

Visible male / female differences:
Both sexes have a dewlap with a tuft of dark hair on its lower edge, much larger in males. Both sexes bear horns, rising from the top of the head in the plane of the face, nearly straight, with a spiral ridge. Horns are much thicker and much more prominently ridged in males than in females, but are sometimes longer in females. Males often have a patch of stiff, dark brown (and often mud-caked) hair on the forehead. Females have two pairs of mammae between their hind legs. Shoulder height males 67 inches (1.7 metres), females 59 inches (1.5 metres); average weight males 1,540 pounds (700 kilograms) and females 990 pounds (450 kilograms).

Diet:
Eland are predominantly browsers. They graze on green grass, which is the bulk of the diet in summer. They prefer grass burned within the past year. Eland eat also leaves, twigs, fruit and berries and dry fallen leaves. They are very difficult to fence out because of its jumping prowess and can be a problem in crops.

Behaviour & Habits:
Eland are gregarious animals and move around in small herds of 4 – 12 animals. The calving season takes place from October to January, and during this time the bulls leave the breeding herds to form bachelor groups.
Eland are not territorial and movements are generally determined by food preferences and availability. Eland feed at night when vegetation contains more water. They break down branches by twisting them between their horns or hooking the horns over it. Eland do no sweat during the day but allows body temperature to rise during the day, then unloads excess heat at night.

HUNTING THE CAPE ELAND:
Tactics:
Eland can be successfully hunted using the walk-and-stalk and spot-and-stalk methods when hunting them in typical bushveldt areas, as these type of habitats lend itself well to these techniques. Eland have good eyesight and once their suspicions are aroused they will set off on a persistent trot and will seldom wait around or stop to afford a second chance at a shot.
They can also be successfully hunted from elevated blinds, ground blinds, pit blinds and treestands situated at or en-route to a mineral lick or waterhole. It must be remembered, however, that eland can be fairly independent of surface water and might visit waterholes erratically and unpredictably.

Shot placement:
Eland are massive animals with fairly substantial bone structures. Only two shots are recommended – a broadside shot into the heart-lung area or a quartering away shot.

Follow-up:
Eland can be aggressive when wounded or cornered. Exercise caution during follow-up procedures. Allow 30 – 40 minutes to elapse after a heart/lung shot before beginning with follow-up, at least an hour for a suspected liver shot, and a minimum of 6 hours for a gut shot. It is advisable to have a rifle of 30-06 or bigger calibre handy when following up on an eland. 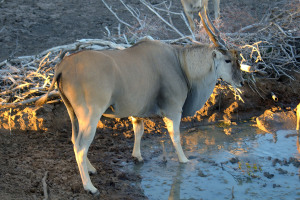 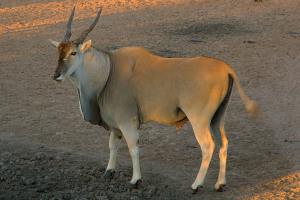 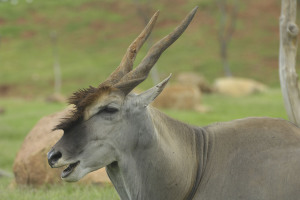 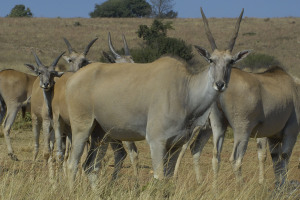